Why is train travel so much more civilized in Europe? Part of the answer lies in the pleasures of its classic railway terminals, grandiose temples to art and industry that were mostly built in the golden age of travel in the 19th century. 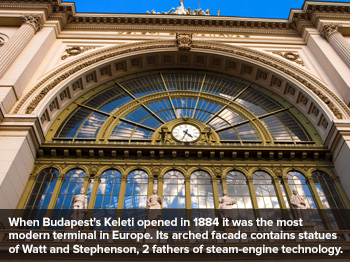 Travelers are fortunate that so many in Europe have survived wars, neglect and the wrecking ball (unlike some once beloved U.S. terminals, such as New York’s Penn Station, leveled in 1963). Today, despite the boom in low-budget air travel, the stations still provide an exhilarating episode in any European expedition. In fact, an ideal journey might be to zigzag with a Eurail Pass across the entire continent, simply to savor the Old World pleasures of its stations.

1) Gare de Lyon, Paris
The French capital has no less than 7 elegant train stations, several of which were painted by the Impressionists. (Claude Monet’s La gare Saint-Lazare has pride of place in the Musée d’Orsay.) But the Gare de Lyon has a special claim to fame—the restaurant Le Train Bleu, whose Art Nouveau flourishes make it the most gorgeous railway eatery on Earth. Sitting in a polished wooden booth while consuming a café crème and croissant and gazing up at 41 lavish oil paintings, gilded curlicues and stained glass is a ticket back to the Belle Epoque.

2) St. Pancras International, London
By the 1980s this Victorian masterpiece had fallen into disrepair, but it reopened in 2007 after a $1.25 billion makeover as the glamorous terminus for the Eurostar to Paris. The distinctive red brick of its Gothic Revival exterior was restored; the enormous glass ceiling, blacked out during the Blitz, was returned to its pristine clarity; and whimsical touches were added, such as Paul Day’s 30-foot-high bronze sculpture The Meeting Place, of a couple embracing. As travelers approach, the station still looks like the haunted setting for a Harry Potter movie, but once inside, they can belly up to a 315-foot champagne bar, Europe’s longest.

3) Milano Centrale, Italy
Mussolini didn’t just make the trains run on time; the dictator also ordered the building of a string of splendid stations, many of which are still admired by architects today. Milano Centrale, completed in 1931, draws on the breadth of Western visual history: Architect Ulisse Stacchini was inspired by the ancient baths of Caracalla in Rome; Union Station in Washington, D.C.; and the prevailing art deco style. Today, chic boutiques fill the interior, as befits a landmark in Italy’s fashion capital. 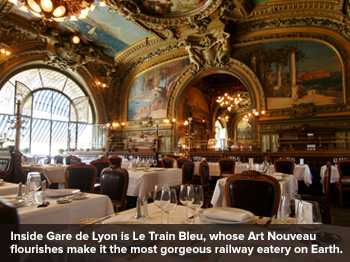 4) Amsterdam Centraal, Netherlands
The structure rising from the water looks like a fairy-tale castle made of frosted gingerbread, and perhaps architect P.J.H. Cuypers had just such a vision while pondering its design. But the station is also an engineering marvel, built on three man-made islands in the IJ River and having 8,687 wooden stilts plunged into the sandy earth to keep it stable. Now, a new metro connection allows the daily business of Amsterdam to flow even faster through these magical halls.

5) Atocha, Madrid
In 1992, architect Rafael Moneo took one look at Madrid’s historic glass-covered station and thought, Greenhouse! Thanks to him, travelers can sip cafés con leche while enjoying the purified air produced by the tropical garden’s acre of flora. If that sounds a little too wholesome for party-loving Madrid, there’s also a raucous nightclub in the old station. (Trains depart from an extension to the original building.)

6) São Bento, Porto, Portugal
The exterior of José Marques da Silva’s creation is Paris-style beaux-arts, but the grand interior is pure Portuguese: The walls are covered with luminous blue-and white azulejos (tin-glazed ceramic tiles). Artist Jorge Colaço spent 11 years, from 1905 to 1916, painting 20,000 tiles to illustrate colorful scenes from the country’s history. So beguiling is the detail that travelers risk missing their trains.

7) Keleti, Budapest, Hungary
The most poignant memorial to the golden age of British rail lies far from London, in the heart of Eastern Europe. The facade of the main arch in Budapest’s Keleti station contains statues of James Watt and George Stephenson, two heroic fathers of steam-engine technology. When it opened in 1884, Keleti was the most modern terminal in Europe. 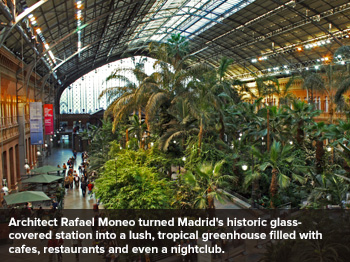 Take time to relax at a table in the Baross restaurant, a charmingly Old World spot that overlooks the hustle and bustle of passengers rushing to every corner of Europe, not to mention metro and provincial Hungarian lines.

8) Antwerpen–Central, Belgium
Antwerp’s station has been worshipped by train connoisseurs since it opened in 1905, thanks to its ethereal dome ceiling and the glass-paneled arch looming over its waiting room. In 2007, the station added 18 more underground platforms around a huge modern recess whose glittering diamond stores make it look like a cavern lined with crown jewels.

9) Praha Hlavni Nadrazi, Prague, Czech Republic
The station unfolds like a metaphor for post-Communist Prague itself: Walk through the bland, mall-like exterior area dating from the 1970s, and follow the signs saying “Historical Railway Station.” It’s a revelation when you ascend an escalator to emerge into a decaying Art Nouveau relic. Designed by Czech architect Josef Fanta, the old station was inaugurated in 1909, when Prague was enjoying a cultural renaissance and a young Franz Kafka was writing in the city. Sit in the café beneath the crumbling dome and admire dusty statues of naked nymphs and peeling flourishes from another age; eerily, all six clocks are stopped at different times.

10) Gare de Limoges Bénédictins, Limoges, France
Named for a monastery that was closed during the French Revolution, this extravagant beauty in bone-white limestone was poorly received by the populace of Limoges when it opened in 1929. Some compared it to “a colossal centipede,” others to “a block of lard in a butcher’s window.” But few doubted its engineering daring: In a bold move by the architect Roger Gonthier, the station’s copper dome and 197-foot-high clock tower were set on a special platform above its 10 railway lines, instead of beside them. Despite the criticism, the complex soon became the emblem of Limoges, and when the beloved dome was destroyed in a 1998 fire, the entire city rallied to have it rebuilt.

Slip away from the town’s main stretch to find secluded.... Read More

As our writer discovers, this Australian city has become a haven.... Read More