Playa del Carmen has long been known as the top foodie locale on the Riviera Maya for food. For decades, chefs from all over have been lured to this low-rise town, an hour south of Cancún, by the dream of opening their own little place by the beach. But when a few margarita-and-mariachi chain restaurants moved in, it began to look as if Playa’s incredible range of dining options might be overrun.

Luckily, that hasn’t been the case. New restaurants are still sprouting, and they’re sleek and sophisticated, hip and quirky—anything but run-of-the-mill. As new places open, others close, so you never know quite what to expect. The following are some current faves, but as you stroll along Fifth Avenue, Playa’s pedestrian-only main street (also known as La Quinta), keep your eyes peeled for the next hot spot.

LOS AGUACHILES
What’s not to like about Aguachiles? Everything’s colorful, starting with the food: Tacos sparkle like jewels on the plate, artfully garnished with sliced red cabbage, avocado, onion, lime and cilantro. Nine homemade sauces sit in squeeze bottles on your table. It may look like a backstreet taco joint, but unexpected touches (striped doors, a wire rack of bottles forming a low wall) give it away: The savvy design team set out to make it look like a backstreet taco joint. A dessert of sliced apple coated with tamarind and chamoy sauce sums up the basic philosophy here: so simple, so delicious.

LUNA MAYA
A private elevator whisks you to this elegant second-floor restaurant at the quiet north end of Fifth Avenue. You can sit inside, but the teak tables on the balcony overlooking the street are lovely. Chef Raúl Pineda’s pan-Mexican food is more ambitious than you’ll find in other places here. It would be a huge mistake to ignore the breadbasket (three flavors: banana, garlic and rum). Chipotle scallops come robed in foam, and there’s a zucchini-flower risotto with huitlacoche (corn fungus) and black truffle oil. Or try Tikinxic fish, baked the Yucatecan way in a banana leaf. The Delirium of Chocolate makes a perfect end to the meal—or you could plead with your waiter to bring another breadbasket.

CENACOLO
Book ahead at this small but high-end Italian spot on Fifth Avenue. At first it may seem odd that most of the tables are right on the street, and there’s even a guy rolling dough and cutting pasta at a table out front as passers-by stop to gawk. Despite the informal setting, everything’s high-quality, from the handsome menus to the custom-made cutlery; even the crowd is glossy. As for the food, it’s beautifully prepared and presented and delicious (try the cappelletti with ricotta). This place has a sense of drama: Watch for a waiter wielding an absurdly gigantic pepper grinder or pouring wine from a long-stemmed glass decanter.

ALDEA CORAZÓN
This restaurant was opened less than a year ago by a family that owns several other successful Playa eateries. Tables are set up in the stylish interior (where the bar is made of rocks piled inside a wire frame) and in a multilevel garden out back, whose fountains, ficus trees and gravel underfoot make it feel far removed from the busy street. Candles and torches add to the romantic mood. The kitchen re-creates tastes from all over Mexico: blue tortillas are “burned” (toasted) to bring out flavor; the chinampa chicken breast is stuffed with goat cheese and zucchini flowers. 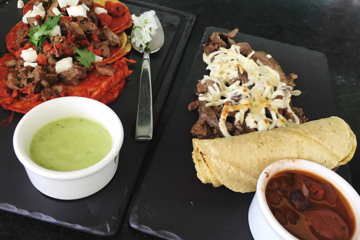 Playa del Carmen has long been known as the top....Read More 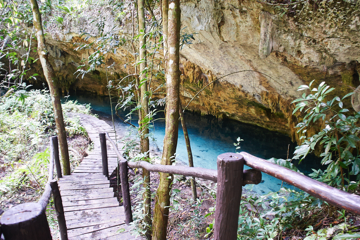 With salt or without, above-ground or below: Mexico's Riviera Maya....Read More