If you’ve seen the Grand Canyon, you’ve probably seen Flagstaff—out the car window, from Interstate 40. Many park visitors pass right through this high-desert town on their way to the South Rim and hardly give it a thought. But we suggest a closer look. An excellent regional museum, a historic downtown and a tasty trail of restaurants and craft breweries are only a few of the attractions. The town is also surrounded by natural and cultural wonders: ancient cave dwellings and pueblos, an extinct volcano crater, a 12,000-foot mountain peak and miles of hiking trails within an hour’s drive. 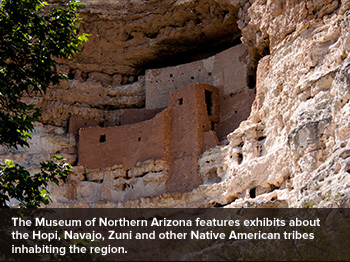 SEE THE WILD WEST
The first trains clattered into Flagstaff in 1882, and cattle cars and cabooses still rumble by the sandstone-and-timber Santa Fe Depot on Route 66. Today the depot houses the Flagstaff  Visitor Center, whose amiable staff dispenses maps and brochures (the illustrated Discovery Map gives an excellent overview of downtown and area attractions). From here you can take a self-guided walking tour of the well-preserved historic district and its Wild West–era taverns. Keep an eye out for 21st-century flourishes, too: murals and sculptures courtesy of Flagstaff’s vibrant public-art program.

The history lesson continues just south of downtown near the Northern Arizona University campus, at Riordan Mansion State Historic Park. Guided tours of the manor house, a 13,000-square-foot masterpiece of Arts and Crafts architecture that is the park’s main attraction, are offered daily.

The mansion was constructed in 1904 for the Riordan brothers, owners of the Arizona Lumber & Timber Company and back then the largest employers in town. During the tours, docents point out the house’s Stickley furnishings and other handcrafted pieces while describing the lives of the well-traveled Riordans, who were active in national politics and commerce. Their descendants still visit the mansion to pass on family legends.

DISCOVER THE PLATEAU
Tucked into a ponderosa pine forest on the outskirts of town, the Museum of Northern Arizona is one of the finest regional museums in the country. Here you’ll find a trove of information about the natural wonders and cultures of the Colorado Plateau, which stretches for thousands of square miles across Arizona, Colorado, Utah and New Mexico.

The stone-and-timber main building features exhibits about the Hopi, Navajo, Zuni and other Native American tribes inhabiting the region, with an eye to both their past and their present-day lives. Across the museum’s 200-acre campus, the award-winning LEED Platinum-certified Easton Collection Center houses more than 600,000 archeological and biological artifacts, including prehistoric ceramics and zoological specimens. 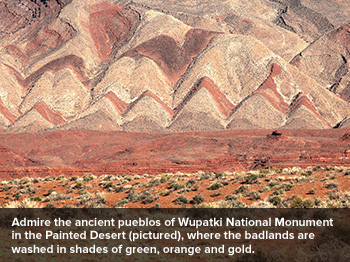 FOLLOW YOUR APPETITE
Ask where to find a good meal and you’ll get responses as varied as Flagstaff’s population. Many will cite Brandy’s Bakery & Restaurant, on the east side of town, as the best wake-up call—the dense sticky buns are always a hit. Old-timers will send you to the quintessential lunch spot, Charly’s Pub & Grill, in the historic Weatherford Hotel. The specialty here is the Navajo Taco: puffy fry bread smothered in beans, cheese, and meat or vegetables.

Loca-carnivores love Diablo Burger, on downtown’s Heritage Square. Nearby, hip Criollo also relies on local purveyors for its Latin-inspired fare. The pork-belly tacos are a standout; wash them down with a fine mescal.

Speaking of local, craft beers are a point of pride across town. Seven breweries and craft-beer bars comprise the Flagstaff Ale Trail—and pour discounted pints for those who purchase an Ale Trail “passport.” Notable stops include Hops on Birch, which has 28 taps and student-friendly open-mic nights, and the Lumberyard Brewing Co., where families gather for brews and barbecued ribs in a restored 1890s lumberyard.

CLOSE ENCOUNTERS
As the Grand Canyon lies to the north and Sedona’s Red Rock country to the south, Flagstaff is uniquely positioned as a base for exploring Arizona’s dramatic landscape. One of the state’s most intriguing features rises about 20 miles north of town in the shape of a massive flat-topped cone: Sunset Crater Volcano, which erupted sometime between A.D. 1040 and 1100 and is a national monument today. Yellow lichen creeps across Sunset’s black lava fields, and well-marked trails wend past volcanic formations and scenic overlooks.

Molten rock gives way to sand as you follow Loop Road north from the crater to the ancient pueblos of Wupatki National Monument. This is Painted Desert country, where the badlands are washed in shades of green, orange and gold. Don’t miss the paved turnoff for Wukoki Pueblo, which rises like a red earthen watchtower from the scrubby desert floor.

The nearby Wupatki Visitor Center & Pueblo marks the site of an isolated farming community where some 2,000 people lived in the late 1100s. A half-mile trail loops around the pueblo’s sandstone ruins; keep an eye out for the reconstructed ball court and the natural blowhole right next to it, which sucks air into the earth or pushes it out, depending on the time of day.

Ten miles east of Flagstaff, 800-year-old cliff dwellings dot the ragged rock walls of Walnut Canyon National Monument. You can get a close-up look via Island Trail, which descends into the canyon past cave-like rooms where ancient families once worked and played. But brace yourself for the return trek: It’s nearly 200 vertical feet in less than half a mile.

GET YOUR FOLIAGE FIX
No matter where you go in Flagstaff, you’re rarely out of sight of the San Francisco Peaks. They culminate in the 12,633-foot summit of Humphreys Peak—the highest point in the state—and their aspen-coated flanks turn gold in the fall.

Hiking trails crisscross the mountains, and the area’s ski resort, the Arizona Snowbowl, has transformed its main chairlift into a Scenic Skyride for warmer months. The 25-minute 2,000-vertical-foot ride drops you on the upper slopes of Agassiz Peak, from which you can see the Grand Canyon’s North Rim, more than 80 miles away.

LOOK UP!
A steep two-lane road winds up Mars Hill to the Lowell Observatory, perched 7,200 feet above Flagstaff. Founded in 1894, the Lowell is where astronomers discovered Pluto. While it makes an interesting day visit, with tours of the Rotunda Museum and Pluto Telescope Dome, the real show is at night. Visitors line up at sunset in front of the famed Clark Telescope, which arrived in 1896—just a few years after those first trains rolled into Flagstaff and set the tiny frontier town on a course to becoming the vibrant destination it is today. 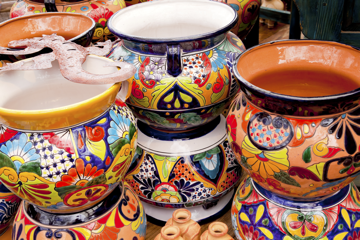 Sedona Will Pull You In 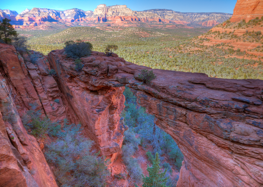 Sedona’s first visitors were Native Americans who made pilgrimages....Read More 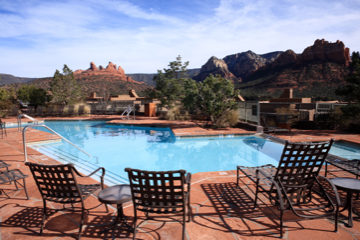