More for Less in Mazatlan

Living inexpensively is practically a competitive sport among the thousands of snowbirds that nest in Mazatlán each winter. They get to know the bus routes, taco stands and fish markets, and they keep up with hot deals—like the burgers during Monday Night Football at Yoopers. They shop and dine like locals, learning the art of low-cost fun from full-time Mazatlecos. With these insider tips, you’ll be amazed how far your budget stretches.

Kitchens are among the best perks at the resorts on the golden beaches in Mazatlán’s Zona Dorada. Stock up on basics at the Soriana supermarket, a short bus ride from most resorts. But the real fun is in meeting the butchers, bakers and anglers selling at city mercados (markets) and in neighborhood shops.

You’ll get first dibs on the morning catch if you rise early to greet the returning pangeros (fishermen) at dawn on downtown’s Playa Norte. Or sleep in and then head to the sidewalk shrimp market on Aquiles Serdán, where you can haggle with las changueras—apron-draped ladies who sell shrimp, octopus and other mariscos from ice-packed plastic buckets.

Over at the Municipal Market, formally known as the Mercado Pino Suárez (at Aquiles Serdán and Melchor Ocampo streets), take time to admire the wrought iron façade—this art nouveau madhouse dates to 1899. Inside, the counters are overflowing with mangoes, pineapples, tomatoes and all manner of chilies, spices and beans. If you know you’ll be washing your fruits and vegetables in purified water, you should be able to bypass the peelable produce rule and gather some lechuga (lettuce) and fragrant cilantro. If you’re looking for a plump chicken, you’d best shop early—the meat and fish aisles grow more pungent as the day progresses. Several stands sell the plaid plastic totes no self-respecting homemaker would be without (the ones bearing the likeness of Frida Kahlo or the Virgin of Guadalupe make great souvenirs). While you’re in the area, pick up a $5 arrangement (of gladioli, say, or sweetheart roses) at the nearby flower market (Aquiles Serdán at 16 de Septiembre). Splurge on pastries at Panamá Bakery.

In the 10 minutes it takes to putter by boat from downtown’s port to Isla de la Piedra (Stone Island), it feels as if you’ve returned to Mazatlán’s Zona Dorada circa 1960. The island—actually a peninsula—faces the port and cruise ship dock and has one of the best beaches around. Mild waves lap at a long stretch of tan sand lined with seafood shacks selling pescado zarandeado (whole grilled fish in a spicy glaze) with tortillas, rice and beans. Island excursions include a leisurely cruise, lunch and open bar (Viajes el Sábalo). Replicate the experience for about half the price by taking a bus and water taxi, then hitting Lety’s, midway along the beach.

Mazatlán’s not all about sand and sea. The city is surrounded by lagoons, villages, ranches and mountains, all worth exploring. Our favorite countryside getaway involves a 40-minute drive to El Quelite, a beautifully preserved 19th-century village at the base of the Sierra Madre. Humble stucco, brick and wood houses buried in fuchsia-colored bougainvillea line quiet cobblestone streets by the plaza’s filigreed gazebo and modest church. The main attraction here is lunch at El Mesón de Los Laureanos, where Dr. Marcos Gabriel Osuna greets every guest like an old friend. You’ll meet Lola, the roving green parrot, and choose from a tasty menu of regional chilorio (shredded pork), codorniz (quail) and lengua (beef tongue), or quesadillas for the less adventurous.

It won’t cost you a single peso to see the art that’s displayed along the city’s beachside malecón (promenade). Bronze sculptures present an open-air history of the city—there’s a pulmonía (one of Mazatlán’s famed open-air taxis) and a beer-brewing vat to honor the local Pacifico brewery. Native-born movie star Pedro Infante is memorialized on a motorcycle pointed toward the sea, while an enormous sculpture of a lighthouse, marlin, fisherman with his net and a voluptuous nude woman honors the fishing fleet. The 12-mile-long malecón is busy day and night with joggers and couples strolling arm in arm. Crowds gather at the foot of Sánchez Taboada for impromptu shows at Cliff Diver Hill.

Old Mazatlán’s Plaza Machado is a virtual stage show on weekend evenings: Artists set out beaded jewelry, musicians play sax and guitar, giant screens display old black-and-white movies, and waiters rush about at sidewalk cafés. At the heart of it all is the beautifully restored Teatro Angela Peralta.

Kids can’t resist the bizarre creations, like tacky shell roosters, at Sea Shell City Museum. The artisans’ market next door has some surprising finds, especially at the tiny store Hecho a Mano, where silly coconut masks go for $12 and miniature skull figurines for $10. By now it must be time for two-for-one drinks at Joe’s Oyster Bar on the beach or happy-hour specials at pretty much any Zona Dorada bar. Now do you feel like a pata salada (sandy-foot local)?

All Resorts in Mazatlán 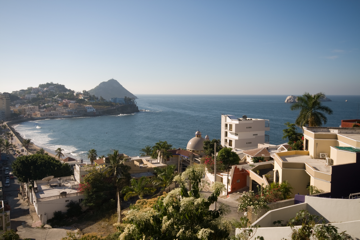 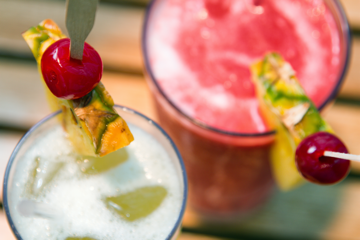 Kick back and enjoy the extra convenience....Read More