Seasonal Foods & Where To Taste Them

There’s nothing like the delicious taste of your favorite local foods when they’re eaten at the peak of freshness — except perhaps enjoying them in a beautiful place while on vacation! Here’s a look at 12 of the most popular — and tastiest — seasonal foods, the months when they’re at their peak, and great destinations to sample them all.

Savor fine truffles alongside perfectly paired wines at the Napa Truffle Festival in California’s wine country. The start of each new year marks the moment when truffles achieve their strongest flavor and aroma. Stroll through truffle orchards and learn how they’re harvested, meet the truffle dogs who discover them, and learn how to cook truffles with some of the region’s most celebrated chefs.

Foodie lore dictates that the best months to enjoy fresh oysters are those with the letter “r” in them, and February certainly qualifies. It also happens to be the month when the annual Lowcountry Oyster Festival takes place at the historic Boone Hall Plantation just outside Charleston, South Carolina. Considered the largest oyster festival in the world, the event features live music, shucking and eating contests, and of course, the beautiful backdrop of Boone Hall.

In Chalmette parish, just a few minutes from New Orleans, the Louisiana Crawfish Festival serves the small crustaceans synonymous with Louisiana cooking every which way possible, with live Cajun music, crafts vendors, and amusement park rides “on the side.”

Almost 100% of the artichokes grown in the U.S. are grown in Castroville, California, just 19 miles from the popular seaside town of Monterey. With artichokes at their peak from March to May, April is the perfect time to visit this charming area. The veggies’ mild nutty flavor makes them perfect for dips and soups. Snap a pic with a 20-foot, concrete artichoke at the aptly named Giant Artichoke Restaurant. You can also stop at one of many artichoke farms, such as Pezzini Farms — check out the on-site Choke Coach, a food truck known for its french-fried artichokes. 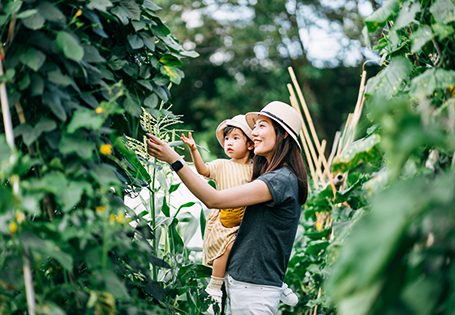 May: Sweet Corn In Florida

May kicks off sweet corn’s peak season, which lasts through September across the U.S. The Sunshine State, however, is the biggest producer of sweet corn, so it only makes sense that it hosts the Sweet Corn Fiesta every year at the South Florida Fairgrounds in West Palm Beach. Join in shucking contests, taste delicious sweet corn cooked a variety of ways, and watch the National Sweet Corn Eating Championship — all for just $5!

If you’ve ever wanted to lay your eyes on the world’s largest peach cobbler, you’ll want to visit the Georgia Peach Festival held over two weekends in June in Peach County, Georgia, just 90 minutes from Atlanta. For 35 years the sister cities of Fort Valley and Byron have hosted parades, concerts, peach pancake breakfasts, and fun activities like peach-eating contests for those who love good old-fashioned outdoor festivals.

Peak Maine lobster season is between late June and late December. If you want to attend the annual Maine Lobster Festival, you’ll have to visit this corner of New England in August, when the event takes place in Rockland. Extend your trip with an easy two-hour drive to Maine’s other icon, Acadia National Park.

Hatch chiles are harvested between mid-August and mid-October, which makes September the perfect time to pick up these medium-heat, sweet and smoky chiles at one of the state’s many farmers markets. In part because of its short season, the hatch chile is prized in the Southwest and can be found in everything from sushi to ice cream. Visit Hatch, New Mexico, during Labor Day and check out the annual Hatch Chile Festival for chile roasting, tasting, midway rides, and live folklore entertainment.

From baking warm apple pies to apple picking at picturesque orchards, Washington has been producing over half the apples grown in the United States since the 1920s. The three-day Olympic Peninsula Apple & Cider Festival is a must-do experience, featuring harvest dinners, cider tastings and pressings, miniature golf in an orchard, and more.

Deliciously sweet and flaky, stone crabs are a Florida delicacy that’s only in season between October and May. Go fishing for stone crabs or taste them at myriad restaurants throughout the state, including Joe’s Stone Crab, a South Beach icon whose menu pays homage to the crustaceans.

In the pecan capital of the world, harvest season kicks off in the fall and runs through the end of each year. So it’s no surprise this buttery, sweet-tasting nut is one of the stars of most holiday menus. You can find pecans on menus and at places like Pearson Farm, a fifth-generation farm famous for its pecan crumbles.

« Back to Previous Page

*These vacations are limited and subject to availability.

Many of the products and services available in this program are provided by third-party guides, vendors and service providers (“Third Parties”). RCI does not make any representations regarding the availability of or endorse any of the products or services provided by Third Parties. RCI expressly denies any liability for an individual’s engagement in any activity offered by or the use of any Third Parties. Additional fees, terms and conditions, and restrictions may apply and are subject to change as determined solely by the Third Parties. © RCI, LLC. RCI and related marks are registered trademarks and/or service marks in the United States and internationally. All rights reserved. Printed in the USA.