10 of the World's Most Scenic Golf Courses

There’s something about a golf course that beckons: the emerald-green, perfectly manicured grass; the challenge of clearing the sand traps; the inevitable lure of the clubhouse. Anyone who tells you golf is just a game hasn’t played these 10 courses. 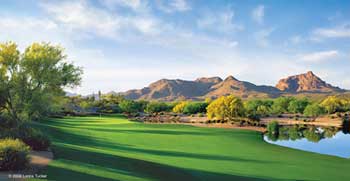 We-Ko-Pa Golf Club
Scottsdale, Arizona
Owned by the Fort McDowell Yavapai Nation, the two courses here are otherworldly in the extreme: All 36 holes are surrounded by mountain views, and you may spot roadrunners, bald eagles and even an occasional coyote as you play. Hole 8 on the Cholla (“Cactus”) course may be the most picturesque, having a prime overlook on the Four Peaks Mountains and the Mogollon Rim. After the game, drop in at the We-Ko-Pa Resort’s Ahnala Restaurant for poblano corn chowder and steaks cooked on a mesquite grill. wekopa.com.

Prince Golf Course at Princeville
Kauai, Hawaii
Named for a 19th-century Hawaiian prince, this par 72 course is stunning yet demanding, offering a series of peaks and valleys. Designed by Robert Trent Jones, Jr., even the golf carts are luxe—each one is fitted with a GPS that provides an overhead look at the entire green, including hazards. This course is a member of the Audubon Cooperative Sanctuary Program; it’s also home to exotic (and, unfortunately, endangered) birds of the islands, such as the gallinule, coot and long-legged stilt. Even nongolfers will enjoy hanging out in the clubhouse, which has a panoramic view of the Pacific. princeville.com

Coronado Golf Course
San Diego, California
A well-maintained bayside golf course with relatively inexpensive greens fees? It’s true: In almost every way, Coronado Golf Course gives nearby high-end Torrey Pines a run for its money. Built in 1957, the par 72 course has the San Diego skyline to the north and the Hotel del Coronado (famous for its starring role in Some Like It Hot) to the west. We recommend playing at twilight (only $20 on weekdays). With the money you save, stop by nearby Miguelito’s Restaurant for fish tacos. Note: Book your tee times early, using the Coronado’s website—it’s a popular course, so reservations are encouraged. golfcoronado.com

Doral Resort
Doral, Florida
Donald Trump owns a multitude of skyscrapers, the Miss Universe beauty pageant and, among many other things, this golf-centered resort, a favorite in Southern Florida since it opened in 1962. Why it was well-worth his investment: five stellar courses, including the Jim McLean Signature Course and the 7,608 yard Blue Monster Course, which is known for its deep bunkers and undulating greens—all just a quick drive from Miami. We particularly love Greg Norman’s Great White Course, for its crushed coquina shells on every hole. trumphotelcollection.com. 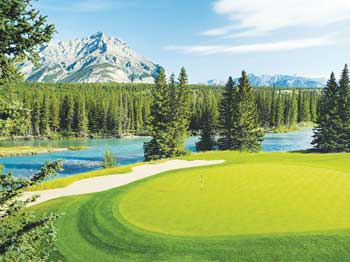 Fairmont Banff Springs Golf Course
Banff, Alberta
Opened below snow-dusted Sulphur Mountain in 1930, it was the first course on earth to cost more than a $1 million to build. The signature hole, the Devil’s Cauldron (hole 4), may be only a par 3, but it earned its moniker with a tee in the wilderness, a deep lagoon and … was that a moose? After a round, check out the clubhouse for house-smoked meats (the pulled-pork sandwich is awesome, especially paired with an Alberta-brewed Big Rock ale). fairmont.com/banff-springs.

Caledonia Golf & Fish Club
Myrtle Beach, South Carolina
Approaching the 18th tee shot here, you could be forgiven for thinking you’re golfing on a movie set. The spot is framed by live oaks dripping with Spanish moss. At a nearby tidal pool, osprey, wild boar and even alligators are regularly spotted. Frequently compared with Augusta National for its well-designed layout, Caledonia is also often deemed a golf-course-meets-tropical-garden, thanks to its lush, overly manicured grounds. When that last putt sinks into the final hole, hit the adjacent veranda clubhouse for craft beers and oyster or shrimp po’boys. fishclub.com

Harbour Town Golf Links
Hilton Head, South Carolina
Magnolia trees, railroad ties, palmettos and murky lagoons: On this Pete Dye-designed masterwork, they’re not just elements of scenery but strategic challenges to even the most advanced player. But it’s trappings like this that make Harbour Town a favorite (the PGA Tour’s RBC Heritage is hosted here every April). Your reward after a round on the last green? A prime view of Caliboque Sound and the red-and-white-striped Harbour Town Lighthouse. seapines.com

Cabo del Sol
Cabo San Lucas, Mexico
There are two 18-hole courses here, Ocean (designed by Jack Nicklaus) and Desert (Tom Weiskopf). If you have to choose, check out the seaside course for three reasons: whales breaching offshore from December through March, seven holes with panoramas of the Sea of Cortez and—oh, yeah—the beach! Golfers have been known to jump in barefoot after that last putt. cabodelsol.com. 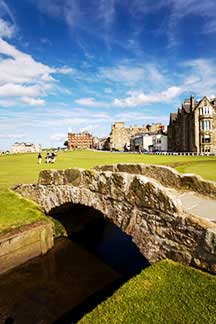 Legend has it that golf was born right here during the Middle Ages—and became an official sport when, in 1552, Archbishop John Hamilton’s charter gave the people of St. Andrews the right to play at the Links. The course is still a pilgrimage site for golfers from around the globe and is renowned for its double greens, some of which are larger than a football field. There are six other courses here, including the New Course, which opened in 1895, and the Castle Course, whose 17th hole is perched on a cliff overlooking the town of St. Andrews. standrews.com.

Punta Espada
Cap Cana, Dominican Republic
Powdery sand, chartreuse grass and aqua-blue, glass-clear water are all par for the course at Punta Espada, a Jack Nicklaus signature golf course in Cap Cana. Since eight of the 18 holes front on the sea—and the list of recent players includes Greg Norman, Gary Player and Fred Couples (the latter won the PGA’s Champions Tour here in 2010)—it’s easy to understand why golf magazines routinely anoint this the best course in the Caribbean. Though it looks like paradise, the course can be challenging (particularly the 13th hole, which sits 250 yards from the back tees and has a 200-yard carry over water). Watch for the resident iguanas, which you can often spot on the greens. puntaespadagolf.com.

From white-sand beaches to world-class golf courses, the Chinese....Read More